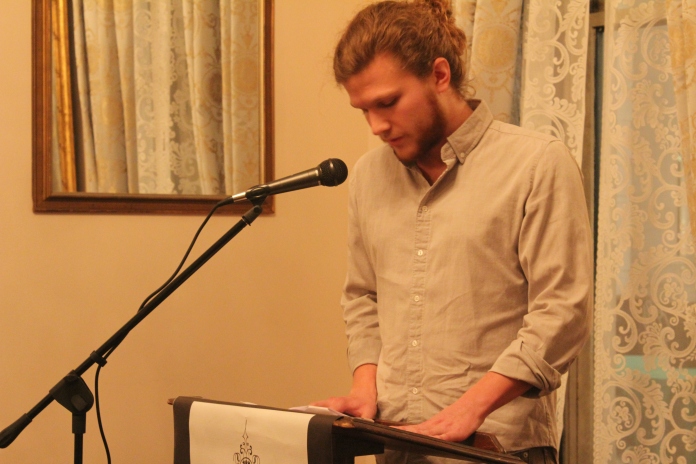 Connor Crawford is a senior at Tulane University and is a Spanish major.

He read fiction at our February 4th event. Below is an excerpt from his piece “St. Nick’s Bar & Grill”

Dale cherished the moments at the end of the night when he could just lie in bed and focus all the energy he had left on using one foot to scratch the athlete’s foot on his other foot and vice versa. It felt so good, toenails rubbing the flaky skin away until they reached the tender itchy part. He had bought a nine-dollar can of ointment spray about a week ago but hadn’t used it yet. He didn’t want to.

It was about six-thirty in the morning by the time Dale finally fell asleep. His girlfriend Daisy had left for work at her bakery an hour or so earlier.

He slept until it was five o’clock the following afternoon. His head throbbed and immediately he leaned over and got a cigarette out of his blue jeans on the floor next to the bed. He lit it and lay there smoking in bed for a while. Then he got up, and walked naked to the kitchen to make coffee and toast.

Dale lived alone in a gutted-out building. Daisy slept over a lot because it was closer to her bakery than her bungalow across town. Rent was cheap and he had tons of space. He sequestered his bedroom by hanging canvas drop cloths between old work ladders, left-behind items from a painting business that used to occupy the building. Besides this, the rest of the place was wide open. The side that faced the street was completely glass, and since it faced west, when Dale woke up in the late afternoons like this — as he almost always did — the entire space would fill with a warm dusty natural light. Right along the exposed brick wall perpendicular to this glass was where he had jimmied together a makeshift kitchen, which consisted of a deep work sink, an old stovetop and a series of mini fridges. He kept his microwave and coffee pot on the floor.

Dale had one table in the whole place. It was a white door stacked on top of piles of cinder blocks. In the holes of the cinderblocks he had stuffed magazines and newspapers and all around the desk were stacked books and CD’s, and lines of records leaned against the nearby wall. His old turntable and an ashtray and some notes here and there were the only items on the desk.

Dale reached into one of his refrigerators and fished a pickle out of a jar with his thumb and forefinger. He ate it quickly, then grabbed another one and went and watched the street go by while he waited for his coffee to brew. It was the beginning of rush hour and traffic was sluggish. The power lines that hung above the cars appeared wavy through the building’s old glass. There were plenty of bikers and pedestrians about, as well. All of these commuters were ending their long days at the office, ready to go home and watch TV, eat dinner and maybe try to get laid. Lots of them would also likely end up at a bar.